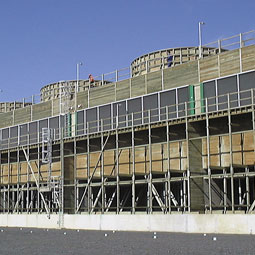 Fibreglass and PVC cooling water pipes were supplied to the gas fire Otahuhu Power Station, built by Mitsubishi for Contact Energy. The majority of the piping was installed in the cooling tower, which was of an induced draught timber construction. There are eight individual bays making up the cooling tower and within the labyrinth of each bay tower the fibreglass piping is circulating the cooling water.

Each bay has it’s own unique piping system consisting of 700 dia. riser pipe and from that the supply lines fed the heat exchangers and spray nozzles. Approximately 1 km of piping was supplied to Otahuhu Power Station plus 400m of 400 dia. pipe – supplying the saltwater from the intake at the pump house to the towers.

Two GRP chemical tanks, 20,000 litres and 5,000 litres, were also supplied to the site for another subcontractor. These tanks are for the chemical dosing of the circulating water. 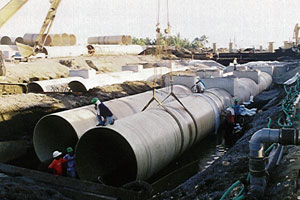 Fossil fuel power plants require vast quantities of cooling water to get maximum efficiency from their steam turbines. For this reason large power plants are usually located close to the large rivers or the sea. In the case of Santa Rita, the plant is located on the shores of Batangas Bay enabling the use of seawater for cooling and delivery of the power plant heating fuel by marine tanker.

The power plant size of 1000MW required twin inlet and outlet pipes of 2.5m dia. with GRP being chosen in preference to traditional materials such as concrete or steel which were allowed in the tender documents. GRP pipe is rapidly becoming the industry standard for power plant cooling water applications for the obvious reasons that dictated it’s choice for Santa Rita: 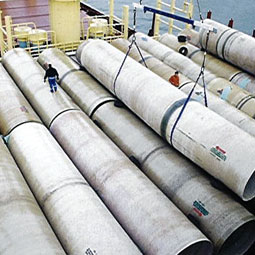 A prime requirement before work could start was Maskell’s ISO9001 registration and a full evaluation by the Clients consultants and Seimen’s Power Generation, the Project Managers, of the manufacturing facilities and detailed design analysis.

Maskell’s order for the pipe came late in the main contract and because it was so late there was not time to establish on site so the pipes were manufactured and shipped from the Auckland plant. This required the chartering of two exclusive vessels to go “door to door”, with the first ship arriving to pick up it’s cargo four weeks after the date of order and the final ship six weeks after that.

This gave Maskell’s two and a half months to complete the contract from a standing start. Two weeks to submit full Quality Assurance/Method Statements and detailed design

to AWWA C950 standards based on site geotechnical information. The remaining time after approval to manufacture, ready to uplift 2200 meters of 2.5m dia. pipe, complete with two 2.5m dia. 90º mitred duckfoot bends and numerous special fittings! The challenge was met.

New ground was broken in the analysis for seismic activity that is of interest to GRP pipe suppliers and users. The initial approach by the specifiers was to treat GRP the same as rigid pipe (concrete) and they originally specified a flexible coupling every 10m of pipe to turn a ‘rigid’ pipe into a flexible one. Maskells pointed out, as so many GRP pipe manufactures have done before, that GRP pipe is in itself flexible and multiple use of couplings was not necessary. This was not accepted until an incorrect seismic analysis using the above ground code, appeared to show that the pipes would separate at the couplings.

Maskell were asked to comment and with the help of one of the worlds leading seismological engineers, were able to demonstrate that not only was the initial evaluation in 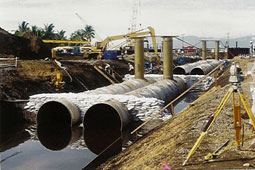 appropriate but also develop a completely new analytical tool for subterranean seismic design. Correct analysis demonstrated that the pipe was sufficiently flexible and strong to handle the most rigorous Zone 4 seismic loading whether butt strap jointed or installed with couplings.

As so often happens the installation bought it’s own problems. An ingenious approach by the contractor was to incorporate the pipeline in the bed of the causeway to the wharf. This reduced the excavation considerably giving a much more efficient inst 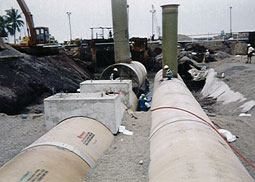 allation. It did however require stone support columns in some areas and this in turn opened up an unexpected aquifer that prevented full dewatering of the pipe trenches. Installation therefore had to take place in a semi-flooded trench which increased the difficulty considerably.

Maskell engineers worked with the contractor on site throughout the contract to help solve these and any other issues that arose to ensure a successful and economic installation. At the time of writing a stage II expansion was about to take place adding a further 500MW of power. This time a further 1000m of GRP 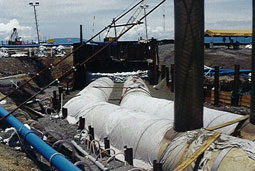 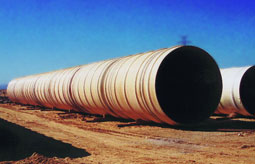 Fossil fuel power plants require vast quantities of cooling water to get maximum efficiency from their steam turbines. For this reason large power plants are usually located close to the large rivers or the sea. In the case of Pelican Point Power Station the plant is located on the Outer Harbour close to the Port of Adelaide. Cooling water from the sea inlet is circulated though the heat exchanges and returned back to the sea. The power plant size of 500MW required twin inlet pipes of 2.2m diam. and an outlet pipe of 2.8m diam. Alternative materials and international and local suppliers were evaluated before the contract was given to Maskell’s in early October for full delivery by the end of the year. 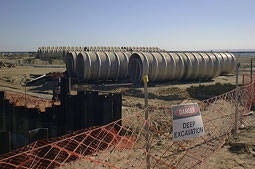 Maskell design engineers worked closely with the contractor and his consulting engineers to establish the most economical installation and backfill materials required for the satisfactory performance of the pipe. This required full evaluation of bore samples taken at the site and geotechnical reports and advising on the optimum trench widths and depths Maskell engineers associated on the selection and evaluation of properties of bedding and backfill materials attending site on a number of occasions.This enabled economic use of excavated native material for backfill both onshore and offshore.

The pipe was manufactured in our Melbourne factory and delivered to site by road. A trench was excavated and dewatered between sheet piling to take the inlet and outlet pipes. Crushed rock bedding was prepared and the pipe placed in and joined by butt strap welding. Flexible couplings and rocker pipes were used at all connections to fixed structures. Temporary bulkheads were installed in the pipes to enable controlled filling when the time came to flood the installation.

The 2.8m diam. outlet pipe ran about 150m into the sea to distribute the warm water though a 50m by 2.2m diam. diffuser with multiple jet outlets. Both the outlet pipe and the diffuser were fully preassembled on land and floated out into position with carefully controlled buoyancy before being sunk into position in a prepared trench. The outlet system was then backfilled completing this portion of the contract in good time. The under water section of the outlet pipe was then connected to the shore section by a coupling ready for flooding and removal of the isolation bulkhead when the time was right.

Fibreglass pipes and fittings were supplied to the Pump Station 11 upgrade. This is the final pump station before the sewer lines go into the Bromley Waste water treatment plant and the existing pump station had to remain operational during the building of the new pump station.

GRP pipe was used because of the long lifespan and the ease of site running large diameter pipe from pump station to the valve chamber and then connection with existing underground pipes. 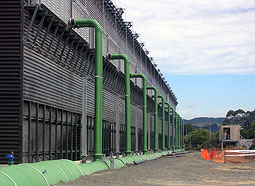 Fibreglass and PVC cooling water pipes were supplied to the gas fired Huntly Power Station, for two projects, the addition of a cooling tower to the existing plant and the construction of a new power station.

The cooling tower pipe work ranged in size from DN1800 down to DN400 and included swept bends, flanges and both buried and above ground pipe. DN1200 pipe connected the cooling tower to the pumps. Full face fibreglass flanged connections were used for non-return valves and valves. 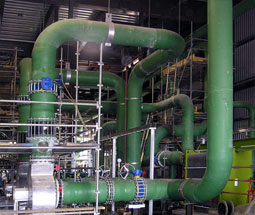 Cooling water pipe work ranges from DN50 up to DN500 with pressure rating of 10Bar for the plant room of the new gas fired Huntly Power Station.

Maskell Productions supplied pipe to site in transportable spools and supplied site staff to join the spools on site and make any adjustments. Flanges for this contract were provided with galvanised steel backing rings. 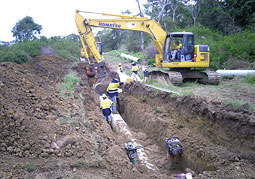 This project was designed to recycle most of Mackay's wastewater to better protect the Great Barrier Reef from 250 tonnes of nutrients entering the system every year, and protect and rehabilitate over committed ground water resources which are at risk of seawater intrusion.

The Bakers Creek waste water treatment plant was built to treat and recycle waste water to allow use for irrigation. A 6.1km DN650 pipeline to transport recycled water from the plant to a reservoir was installed using GRP (fibreglass) pipe. The pipeline was supplied in 11.5m lengths with dual rubber ring joints to allow swift installation. In addition the rubber ring joints could be fully pressure tested for seal integrity as they were laid. 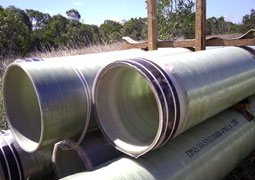 The challenge was to supply 6.1km of DN650 pipe to site at MacKay. Pipe was delivered in several shipments to allow a start on the straight lengths of the pipe run with several areas started at the same time. This was done to avoid laying pipe during the approaching wet season, up to 250m a day was installed.

To allow maximum flexibility with the installation Maskell Productions supplied staff to site to laminate joint (butt and strap) minor direction changes in the pipe line. Where greater changes in direction were required swept bends were welded into the line with axially restrained pipe one either end of the bends extending out until soil friction allowed rubber ring joints. 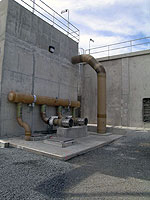 Fibreglass pipes and fittings were supplied to the Silverstream emergency overflow facility.The pipe work was used to connect the outlet of the pumps to the overflow tank, bell mouth opening were cast into the concrete wall of the tank.

DN500 GRP pipes were connected via full face GRP flanges to pump outlets with a 10m rise to the tanks. DN760 GRP pipe was used to deliver to the tanks and the pipes were installed in cradles attached to the tank walls.